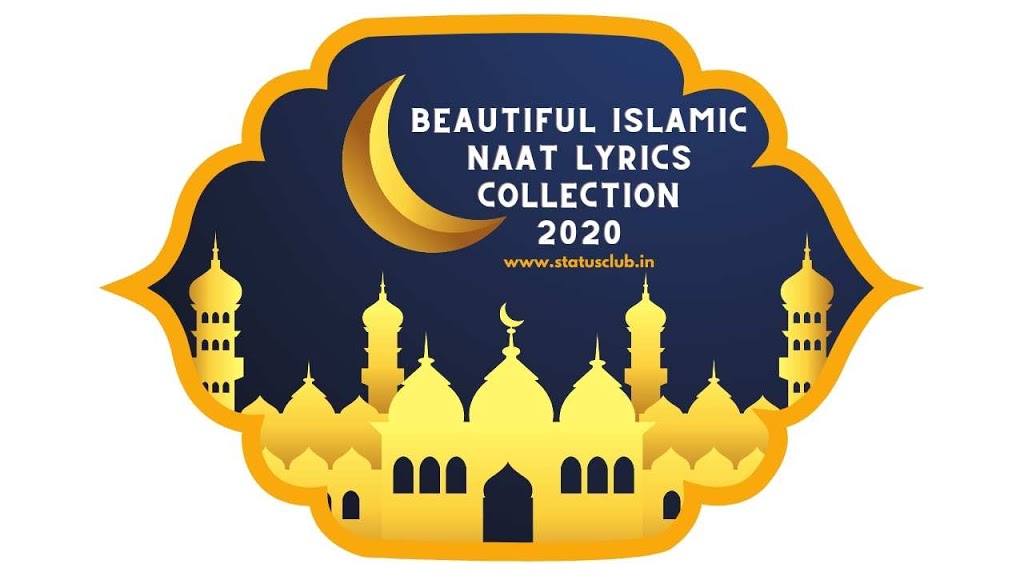 Are you searching for Best Naat Lyrics and it’s lyrics that are famous and loved by many people all around the world?

Here I have given lists of best old naat as well as new naat lyrics that you can note lyrics.

I have separated the Naat list in various parts so it will be easy for you to find the Best Islamic Naat Sharif Lyrics that you want to read.

Here are some of the Popular new naat lyrics Singers that are loved by many peoples. Just Click the link below to directly jump to naat post.

It’s not over yet…

Below I had shared many New Naat Lyrics Lists along with Singer Name.

Best Naat in the World Lyrics

What is Islamic Naat?

This poetic piece is recited to praise Allah and His Prophet Muhammad (PBUH). Traditionally, Muslim poets have used the form of Islamic Naat to defend the Prophet from his enemies.

The poets often praise the Prophet through poetry and song. The meaning of Islamic Naat varies according to its genre.

But some poets have adopted Western styles and are popular today. They also praise the Prophet (PBUH) for conveying a message or an idea.

There is no definite origin of the Naat, but some scholars believe that the poet Kaab Bin Zuhair was the first to recite a Naat.

According to legend, this man had been a poet before he accepted Islam, but he soon began writing Naats in honour of the Prophet.

After his conversion, he was awarded the Prophet’s mantle and became the first Sana-Khawaan, the reciter of Naat.

The traditional Arabic poem, Tala al Badru, is considered one of the earliest naats. This Naat was recited to the Prophet Muhammad during his migration to Medina in 622 CE.

Although it is considered to be the oldest Naat, it is known as naat Shareef, and it is not permitted to use musical instruments to accompany the Naat.

Some scholars, however, have allowed the use of small drums called daf.

The term “naat” derives from the Arabic word “madh” (praise). The earliest Naats were written in Arabic, though it was later translated to Urdu as Naat.

During the Prophet Muhammad’s lifetime, Naat was also known as “madh” and “madeeh” (praising Allah). This Persian-language form of poetry has spread to many other languages worldwide.

Islamic Naat poetry has been written in Urdu for centuries. It is as old as Urdu poetry itself. Major poets from Urdu history wrote couplets in praise of the Prophet.

In the first half of the nineteenth century, naat poetry was recognized as a separate genre. Its evolution is remarkably similar to that of Urdu poetry. It is widely regarded as an essential part of Urdu literature.

Islamic Naat is a form of poetry written in praise of the Islamic Prophet Muhammad. It was initially popular in South Asia. Naat recitation was widespread in India, Pakistan, and Bangladesh.

Today, the tradition has spread worldwide. Naat Sharif’s recitation is famous in many countries, including the Middle East. Historically, the Arabic word for Naat is made, while it is madeeh in Urdu.

There are several variations of the Naat derived from Islam’s various languages.

The roots of Naat are deep and varied. The earliest examples of Naat were composed by Maulana Kifayat Ali Kafi, an elder religious scholar of Muradabad, India.

Many notable poets have contributed to the history of Islamic Naat. Among them are Khawja Qutbuddin Bakhtiyar Kaaki and Jalaluddin Rumi.

These poets are considered icons of the Islamic Naat and its history. These authors’ works accurately reflect a love for the Prophet Muhammad (PBUH).

The later Naats were composed in the form of ‘Jakri’, a form of poetry that has become outdated.

Today, Naats are a popular genre. It is one of the most popular ways Muslims express their feelings and is an excellent source of inspiration for everyone.

How to Recite Naat?

The art of reciting the Islamic Naat began after the Prophet migrated from Mecca to Madinah, and he supervised the poetry.

The most famous poets of the Naat are Hadhrat Hassaan Ibn Thaabit, who benefited from complete guidance from the Holy Prophet.

The recitation of the Islamic Naat is an age-old tradition in Islam. This is the way Muslims show their devotion to the Holy Prophet Muhammad.

The first naat reciter was Hassan Bin Thabit. Later, the tradition was taken up by many contemporary Muslim poets. The word “Naat” comes from the Arabic term “madih nabawi,” which means “praising Muhammad.”

Some poets have a wider range of topics. The Naat has a universal theme, ranging from personal and individual issues to collective and global affairs.

The Naat is often composed to praise the Prophet PBUH, and it is not uncommon to find a verse or poem by a Sufi poet.

So, I am done with my Islamic Naat Lyrics Collection.

1. Which is the Best Naat Loved by People around the World?

In 2022 people have loved the collection of Owais Raza Qadri Naats and we can’t underestimate Nadeem Sarwar Lyrics. So, in my opinion Both are the leaders in Naat Lyrics world.

3. How to Copy Naat Lyrics?

You just need to click on text and hold your finger on it then you’ll get the option to copy that words.

4. How to Share Beautiful Naat Lyrics on Social Media?

5. Who is the Singer of is karam ka karoon shukar kaise ada naat?

The singer of this Naatepak is none other than Ustad Nusrat Fateh Ali Khan – The Legendary Singer.

6. Who is the Singer of are momino tum kahan so gaye ho naat?

Jalabeeb Qadri is the Singer of this Beautiful Naatepak and it is one of my best emotional naatepak I have ever heard.